Works from the Von Kelterborn Collection in Kunsthalle Gießen

Under the title Turning Points, the Kunsthalle Gießen presents selected works from the Collection von Kelterborn, whose focus lies in politically charged and socially critical works by internationally renowned artists. Against the background of digitalisation and globalisation, the works shown reflect our present day as it is marked by numerous upheavals. In this regard there is a strong focus is on video art.

As part of a cooperation with www.blinkvideo.art, the exhibition at the Kunsthalle will extend into the virtual space.

Grateful for the review in hr2: 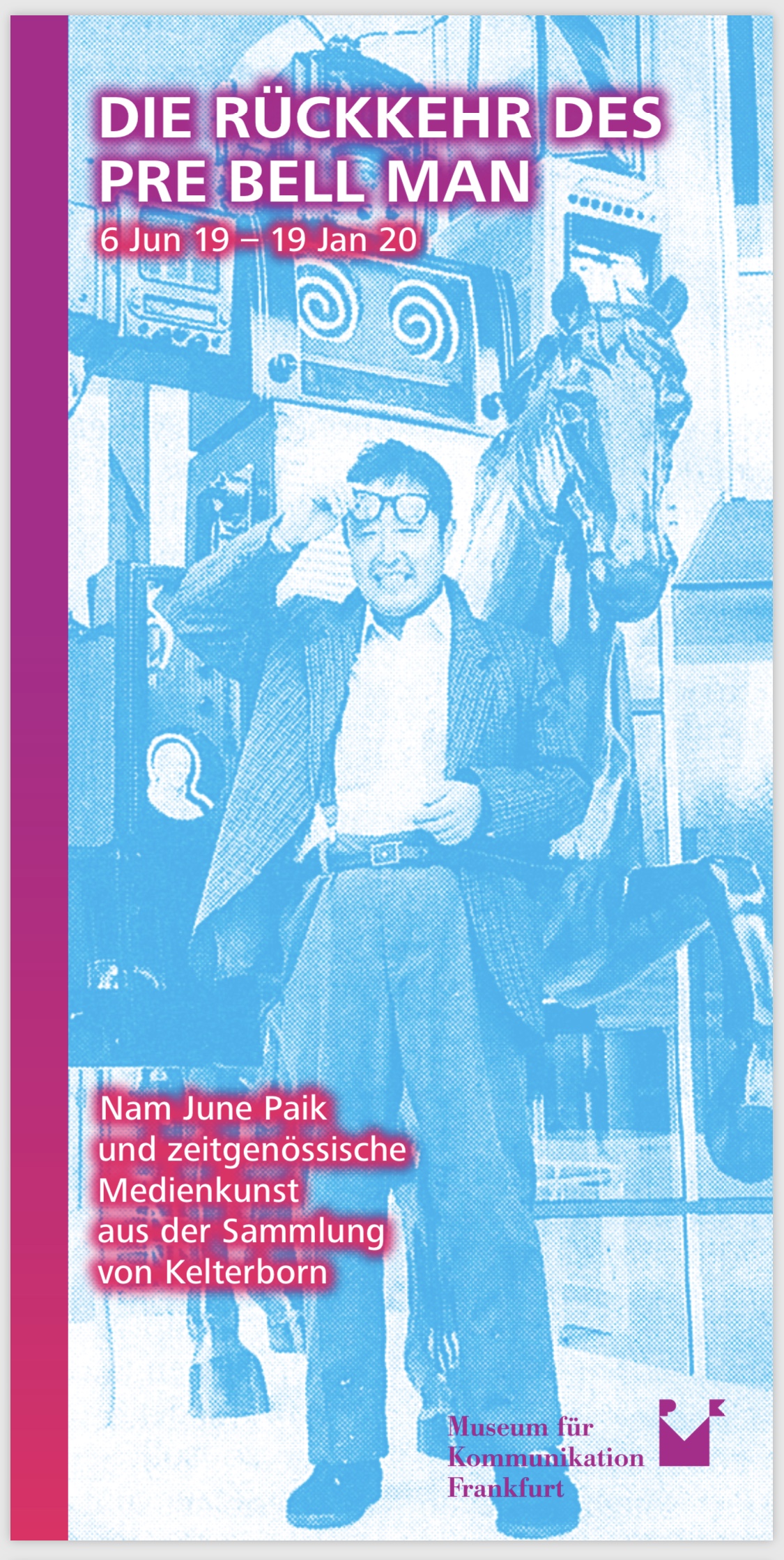 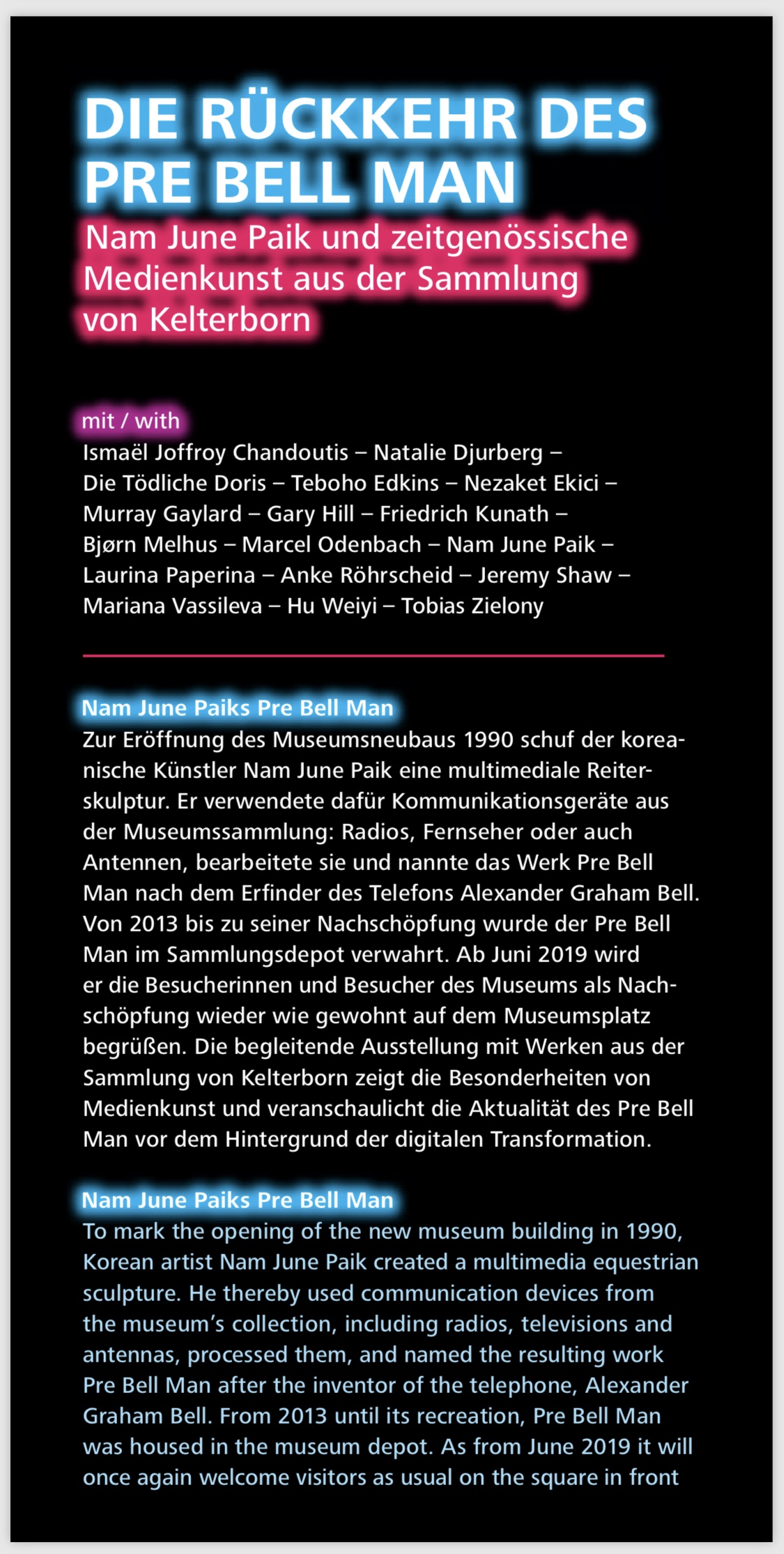 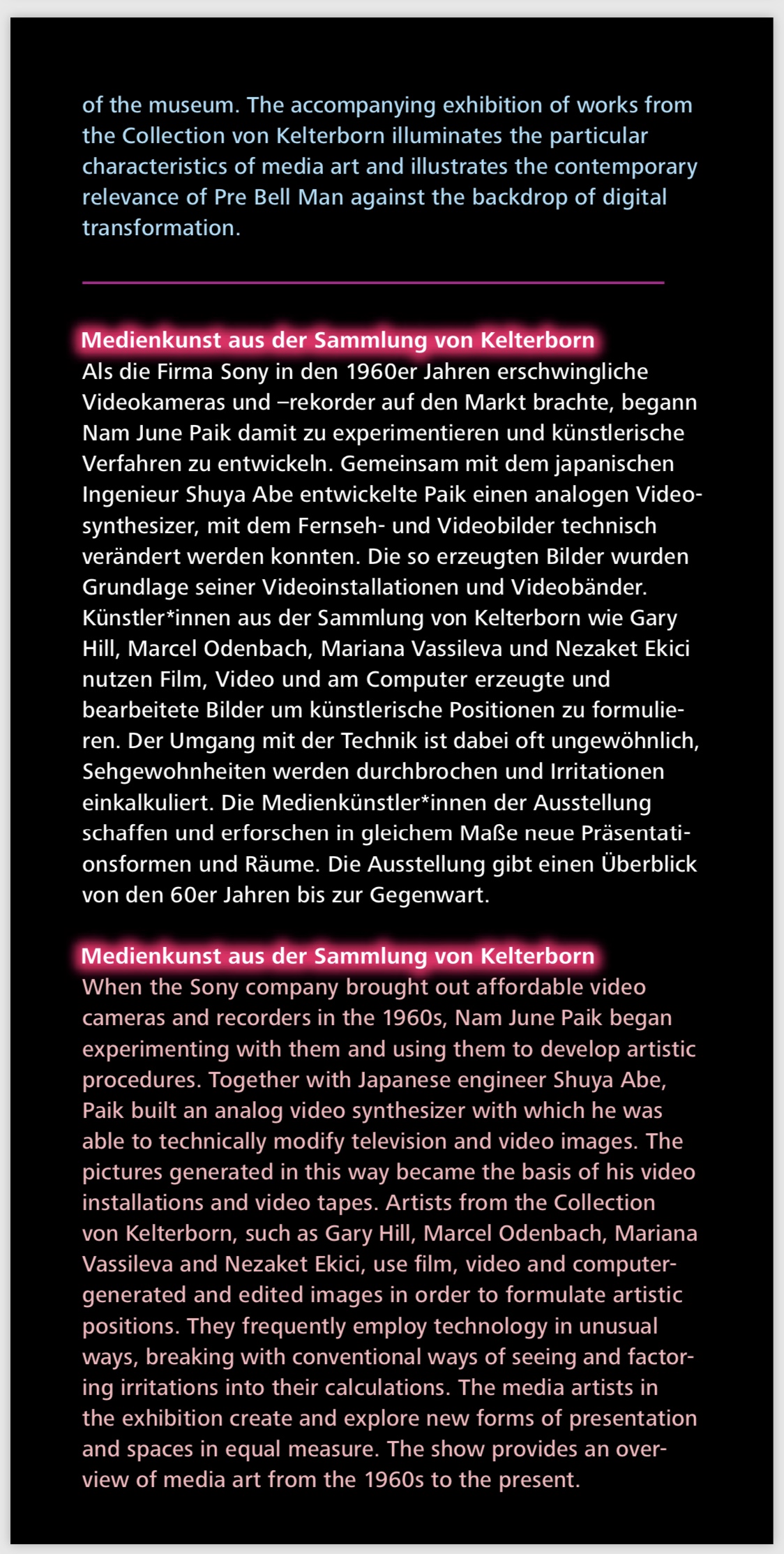 The Wall and Other Stories

March 28 – April 28, 2019, Seoul
http://totalmuseum.org/exhibition/past-exhibition/the-wall-and-other-stories/
The world is changing. Constantly. Sometimes it just happens without us feeling it so much. But today most people realise that new times are arriving. The Wall and Other Stories is about this change. Of course, mentioning the word “Wall” makes people in some countries think automatically about the border between countries and people. However, the title goes beyond this. By talking about “other stories,” we talk about a mindset which follows fundamental values of human behaviour and borders in our thinking. This exhibition is also about a new quality of impact, of influencing, of behaving, of interacting and of data flows. It’s about a new regime of borders and the way they change, in “reality and in our minds”. It’s about power which does not equal into brutality (Jeremy Shaw). It forces us to think and be creative – “does the world exist only if we are watching it?” asked the voice in Harun Farocki’s “Parallel”. “How does the world change if one comes of age?” – Tatsumi Orimoto. “How do we behave in the stress field of nature and technology?” – Korakrit Arunanondchai. And how does humanity handle changes? – “Be water, my friend” says Bruce Lee in Hito Steyerl’s “Liquidity Inc.” There is no easy answer, as always, when someone is part of both sides of an equation. However, understanding the right questions gets us closer to the right answers – and also lets us understand that borders are not abstract but set by each one of us.

Works from the Von Kelterborn Collection in Mönchehaus Museum Goslar

Without respite, screaming headlines assault us from the ticker – on our smartphones, on television, in the print media. ‘Breaking news’ it’s called, and it stokes fears, fuels power fantasies, gives hope, or provokes despair. Alongside sober information, they also spread – often hardly distinguishable from ‘fake news’ – insecurity, unrest and a highly charged atmosphere. In our post-factual age, the short-term raking of emotions often makes any ‘factual’ content of the reporting look like a mere add-on. Art by contrast does not set its store by news flashes. Its pioneering innovations (its ‘news’) are more lasting. And what it has to tell us about today’s world, a world in which more and more people only ever read ‘breaking news’ in the social media, can be seen in exemplary fashion in the works that form the von Kelterborn collection. Can a new, different, individual view of the world as put across by art not be just as breathtaking as ‘breaking news’? The artists represented here penetrate into the many layers, not to say the abyssal depths, of the human psyche, look into fairytale landscapes and digital universes, gaze back into history, observe and analyse a present characterized by the (non-) concurrence of different cultures. They do not close their eyes to the problems of our age, to wars, to crime, to the wastelands in our cities or to the fragility of the human body. In an era marked by globalization and digitization, mass migration and at the same time new nationalist tendencies and insular politics, the exhibition Breaking News also sees itself as a plea for an ‘open society’ as propagated decades ago by Karl Popper. This also includes the freedom of art to tackle political and social issues, not by illustrating them with pictorial propaganda, but by demonstrating the power of their aesthetic expressive potential and thus asserting their autonomy. Participating Artists: Korakrit Arunanondchai, Teboho Edkins, Harun Farocki, Claire Fontaine, Francisca Gómez, Jochen Gerz, Harald Hauswald, Gary Hill, Hu Weiyi, Luzia Hürzeler, Sven Johne, Thomas Kilpper, Barbara Klemm, Jaroslaw Koslowski, Clemens Krauss, Thomas Locher, Renzo Martens, Björn Melhus, Björn Melhus/Yves Netzhammer, Richard Mosse, Henrike Naumann, Marcel Odenbach, Mario Pfeifer, Anke Röhrscheid, Jürgen Schadeberg, Taryn Simon, Hito Steyerl, Mikhael Subotzky, Die Tödliche Doris, Mariana Vassileva, Mia Florentine Weiss https://artfacts.net/exhibition/breaking-news-sammlung-von-kelterborn/846250 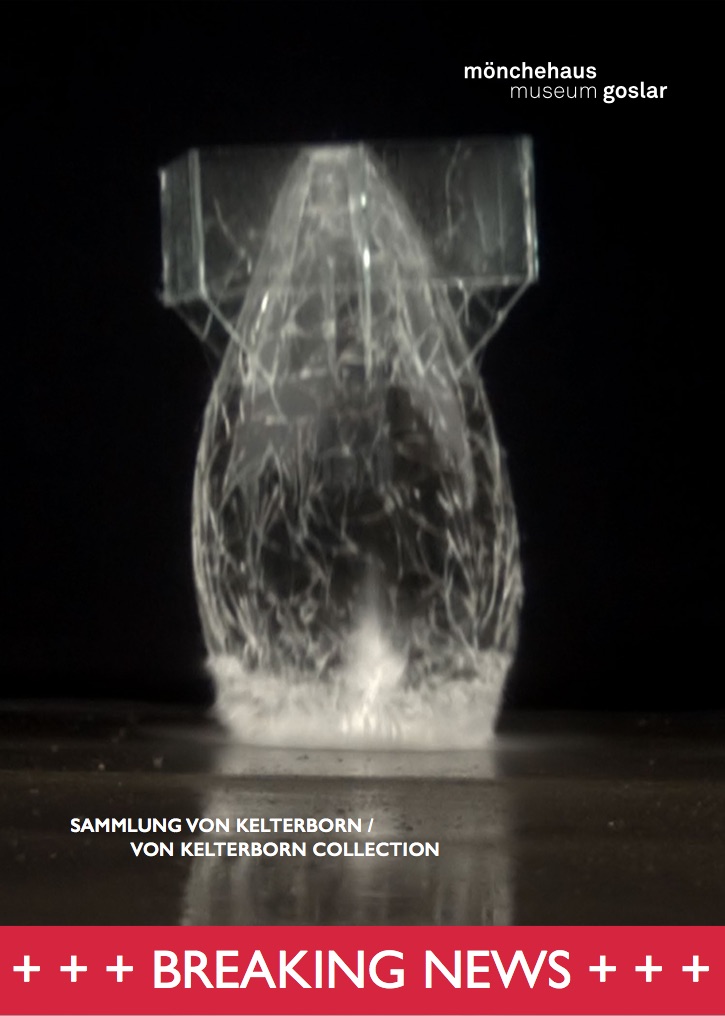 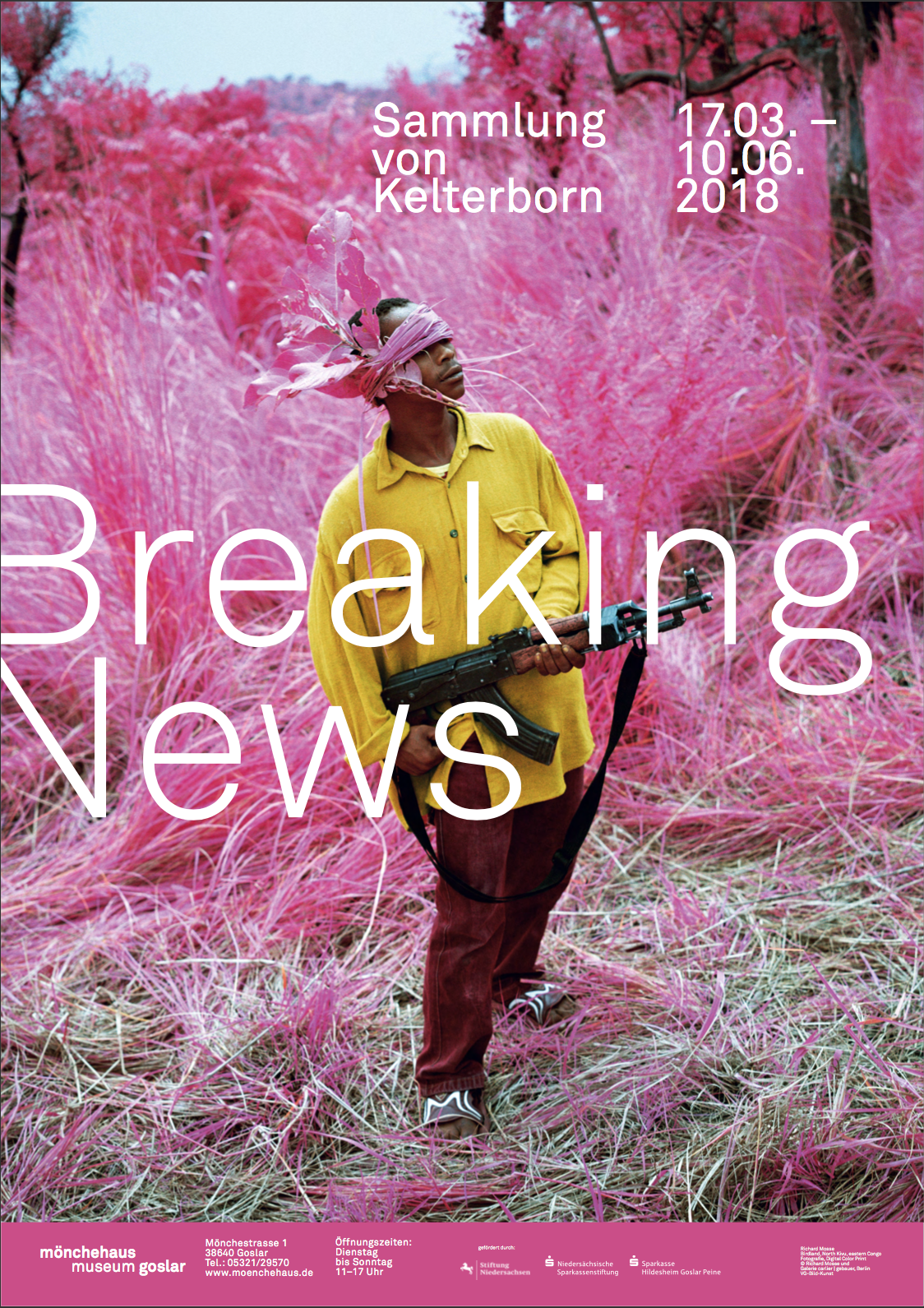 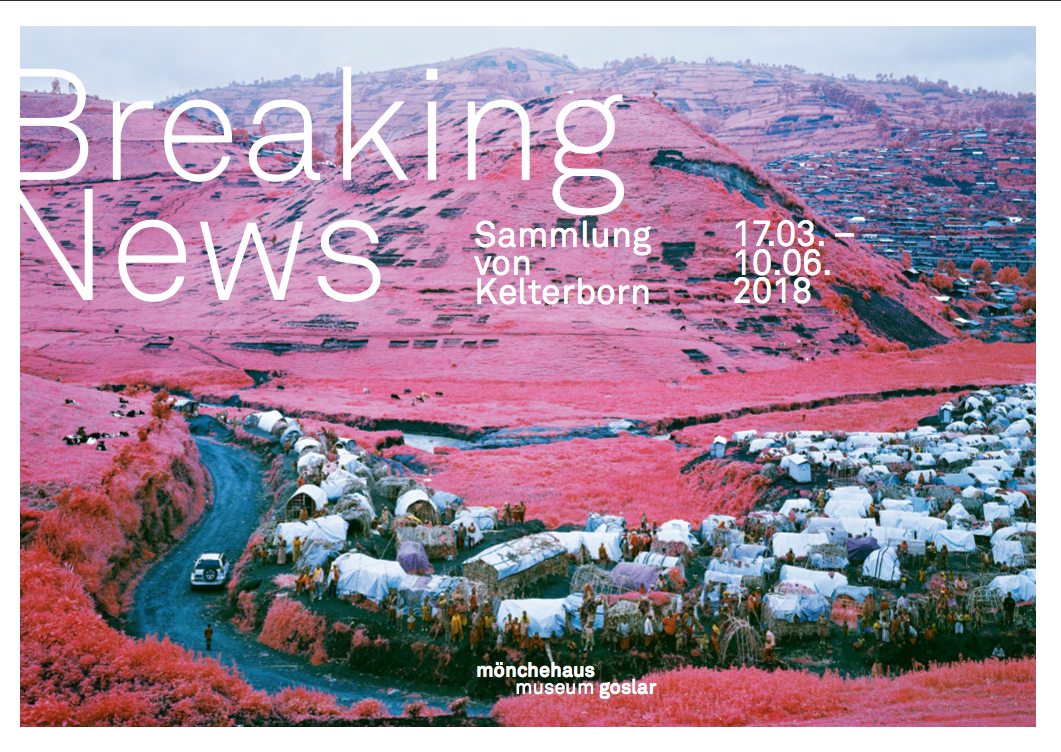 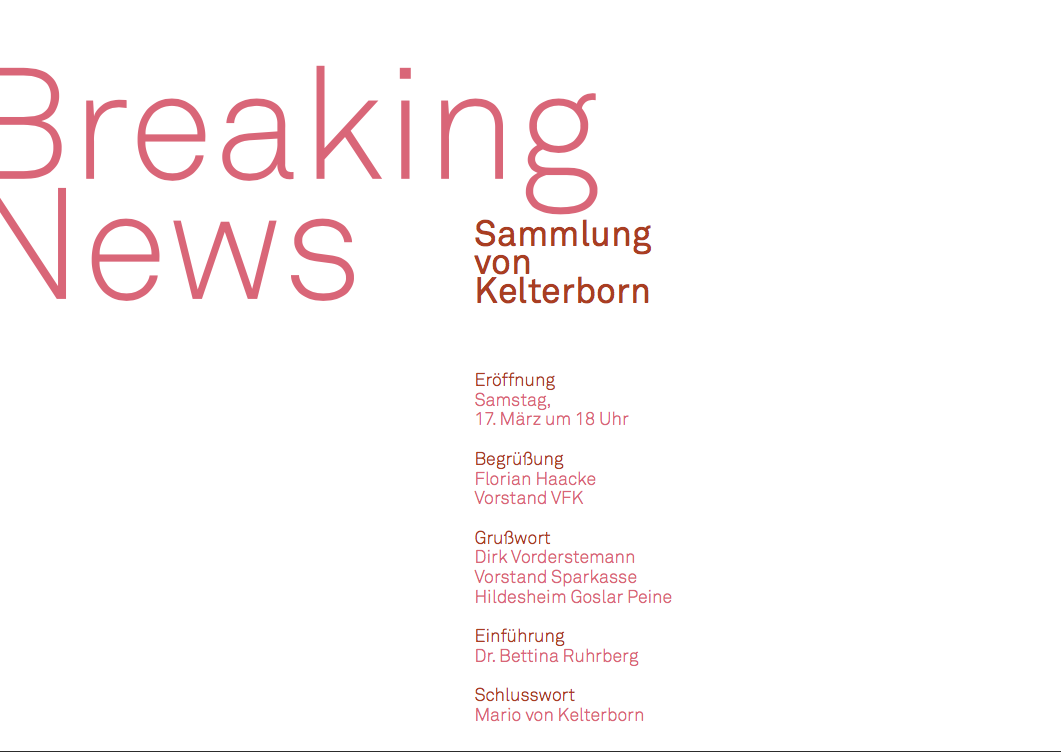 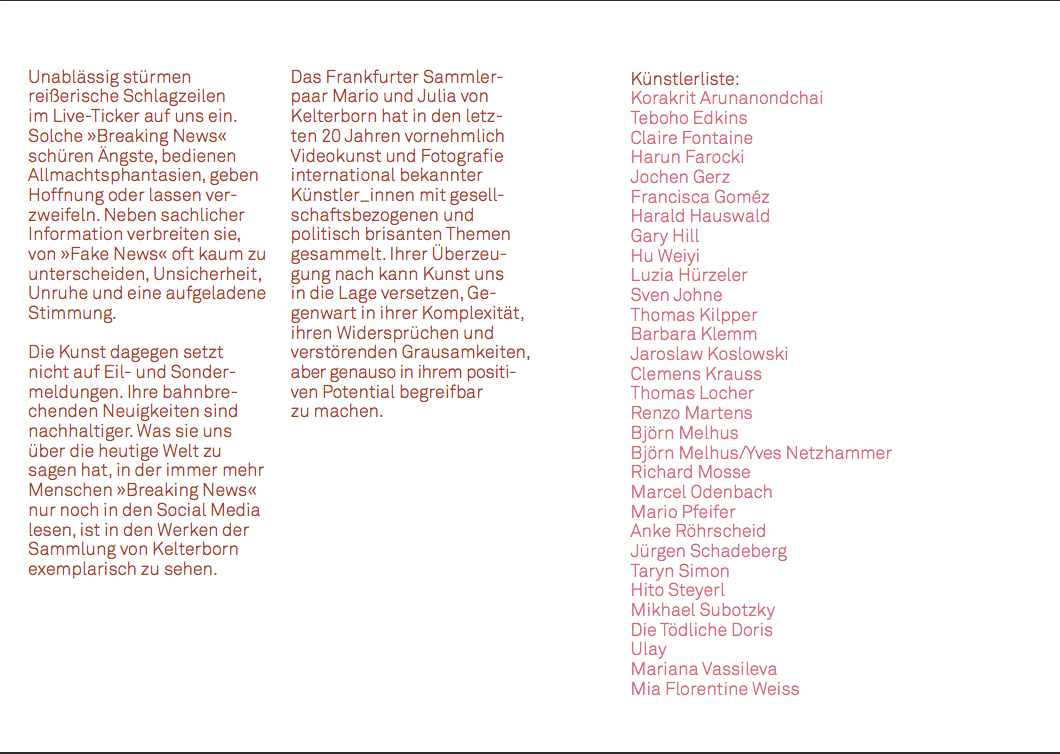 Presentation of the Collection at Museum Weserburg

The second exhibition in the series “Young Collections” presents works from the Frankfurt private collection von Kelterborn. The focus of this extraordinary collection is on socially oriented, philosophically profound, but also politically explosive works by well-known international artists. The collector couple von Kelterborn is convinced that art enables us to render the “present” comprehensible in its complexity, in its contradictions and cruelties, but also in its thoroughly positive potential, and allows us to experience it with both the senses and the mind. They are particularly interested in photo- and video-works. But there are also places in this distinctive collection for Conceptual Art as well as for neon sculptures working with language and texts. At the Weserburg, the collection will be presented to a wider public for the first time. The exhibition title “Come and See” is not only a friendly invitation to the visitors of the Weserburg; it originally refers to the Soviet anti-war film by the director Elem Klimow from 1985. The film, which already during his youth made a lasting impression on the collector Mario von Kelterborn, presents a traumatized society confronted with the horrors of the Second World War. The artists of this exhibition react to the social conflicts of our own era in a similarly persuasive, sometimes disturbing manner. The artists’ collective Claire Fontaine, with the neon work “Sell your debt,” makes a profound commentary on the financial world, which can nowadays be understood only by a few select experts but has widespread impact on all of us. Taryn Simon focuses on international politics. In her large-format work “Avatar,” she presents a man who was digitally created with the help of photographs of various political figures such as John McCain and Fidel Castro. Questions arise with an insistent urgency with regard to power, arbitrariness and opportunism. Homo politicus becomes an enigmatic, quite dubious character. With his multipartite video installation “The Enclave,” the Irish artist Richard Mosse offers oppressive insights into eastern Congo. In that country, rebel groups and warlords dictate people’s everyday lives. Mosse uses a special infra-red film that was originally developed for the military to uncover camouflages. The green tones of the lush landscape are thereby transformed into a psychedelic red. This work, which could already be seen at the Venice Biennale, conveys a terrifying, fascinating view of a brutal conflict that receives little attention in worldwide public opinion. Art such as is to be found in the von Kelterborn Collection, offers no cheap solutions. Instead, it uses aesthetic means to bring to light the complex contradictions, but also the freedom and potential of human coexistence. Participating Artists: Maria José Arjona, Stuart Bird, Nathalie Djurberg, Teboho Edkins, Claire Fontaine, Jochen Gerz, Gary Hill, Clemens Krauss, Thomas Locher, Bjørn Melhus, Richard Mosse, Tatsumi Orimoto, Anke Röhrscheid, Taryn Simon, Mikhael Subotzky, Mariana Vassileva, Corinne Wasmuht, Hu Weiyi, Tobias Zielony https://artfacts.net/exhibition/komm-und-sieh-sammlung-von-kelterborn/623187 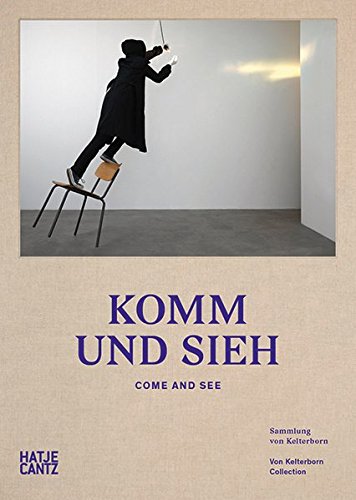 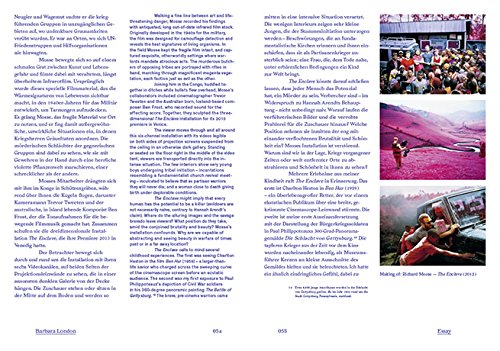 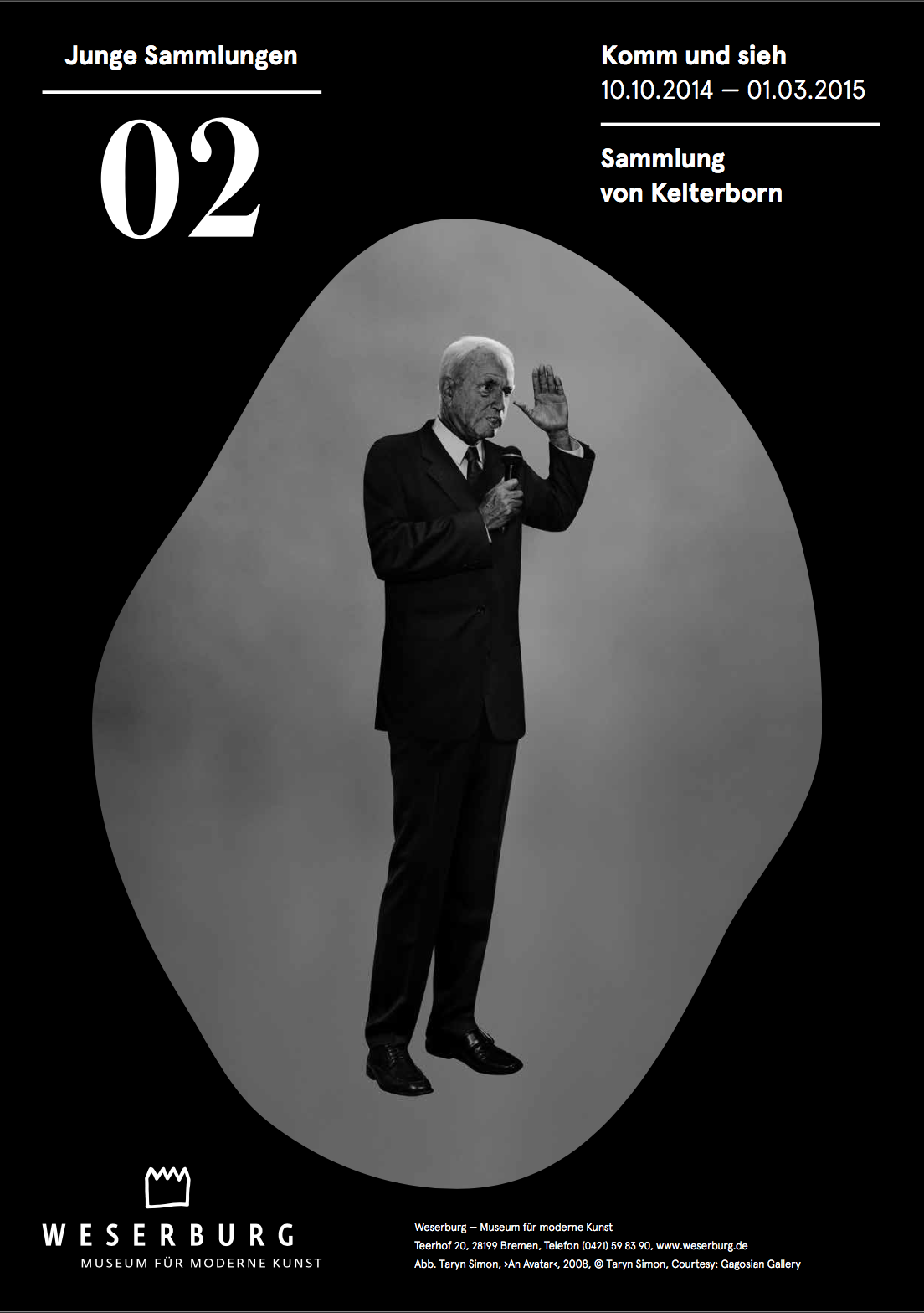 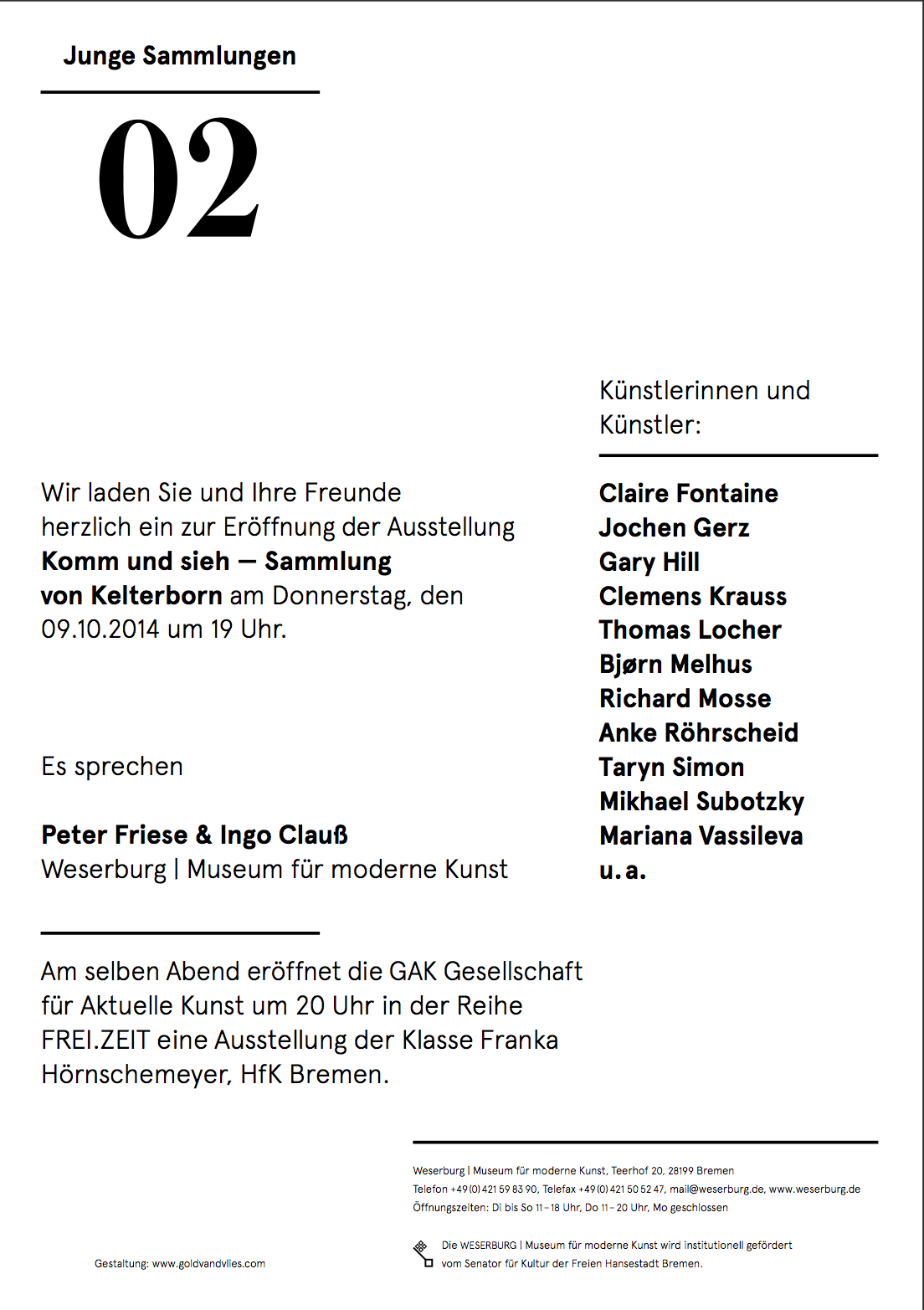 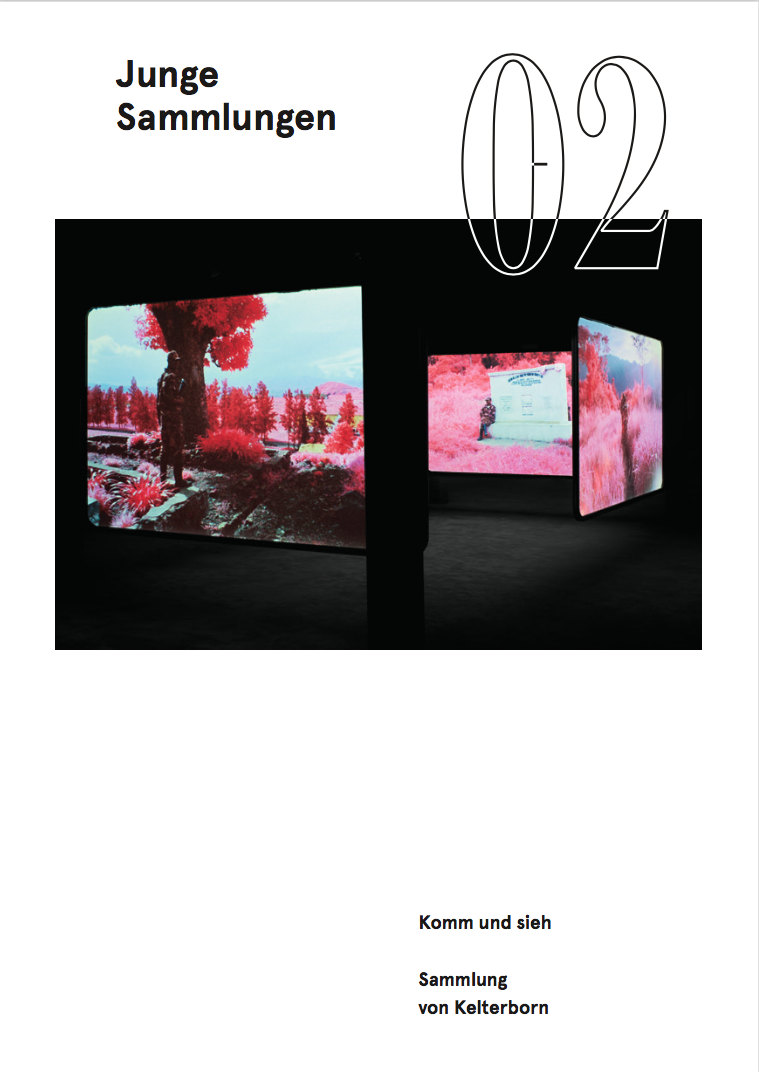